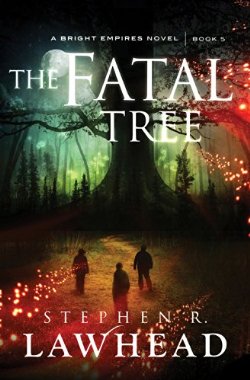 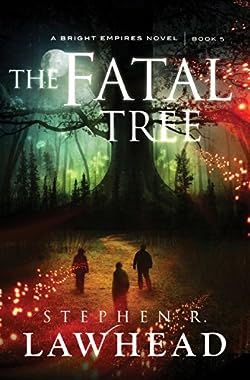 As Bilbo Baggins said … THIS IS THE END … meaning this is Day 3 of touring the THE FATAL TREE by Stephen R. Lawhead — the very last novel in The Bright Empires series.

One of the difficulties of writing a full review is that if you don’t know anything about the other books in the series you’ll be quite lost by my comments below.

So … if you want to read my other reviews of the novels in The Bright Empires, please click THIS LINK, which will lead you to a long list of all my posts related to Stephen Lawhead.

In that link you will find near the top of the list 10 blog posts covering in great detail these other books.

There’s some creative stuff in there, including a fictitious interview I had with Archelaeus Burleigh himself, as well as a recounting of when I spent the better part of a week with Stephen Lawhead, his wife, and his son, Ross at a writer’s retreat!

Today I want to finish off my review by talking about the plot and then finally giving my recommendation.

The plot centers around trying to prevent the “End of Everything” … meaning the rending of the universe one world at a time until it all falls a part. Why? Kit reasons that it was because Arthur Flinders-Petrie raised his wife, Xian-Li from the dead using the power of The Spirit Well.

One of the things I think is interesting is how Lawhead portrayed the Spirit Well … not as I wrongly guessed originally … as a well of souls … but rather as the power of the future, and since Arthur stole some of the future, the future is now ceasing to exist and reality is ripping apart.

This makes for a VERY interesting plot as our characters try to navigate a world where anything can happen and traveling by ley line between worlds and times becomes more and more unpredictable.

I would really like to talk about Burleigh’s conversion from an evil, scheming scoundrel of scoundrels to … well … to a man possessed by remorse for his sins. And why? Because the baker he tried to kill, Etzel Stiffelbeam, has forgiven him and keeps on providing food for him while Burleigh is in prison.

Etzel says he does this because that is what Christ would do, and that drives Burleigh mad until he finally falls to pieces and repents.

Even then, the man struggles. He contemplates murdering Etzel. He tries to kill himself. His entire life has been a lie, and he simply cannot see beyond that.

And so, once our band of heroes realizes that Burleigh might have the knowledge they need to get to the Spirit Well, the remorseful man tags along without permission.

This sets up a very bizarre ending for the novel … one so fantastic that my mind is still reeling trying to figure it out. One of those “my head hurts” moments … and my head rarely hurts from such things!

MY THEORY ON THE ENDING OF THE FATAL TREE

Okay, here it goes. I have heard some complain that the ending of THE FATAL TREE was like the movie INDIANA JONES … the main characters really accomplished nothing. By this, they accuse THE FATAL TREE of having such an ending that all of the main characters are not required for the universe to be saved because a second Arthur Flinders-Petrie appears and stops the first one.

Well … I strongly disagree with this conclusion. I think the main characters HAD to be there for the universe to be saved. How? This is my theory of what *actually* happened.

FACT #1) The main characters (Kit, etc.) know where the portal to the Spirit Well is.

FACT #2) Burliegh is the only one who knows how to use the ports properly, especially now that everything has become unstable.

FACT #3) However, Burleigh would never cooperate with the main characters unless he repents.

FACT #4) He can only repent if Etzel forgives him loves him as Christ would.

FACT #5) So, once all of these pieces are in place, we have now setup the ending where everyone is at the Spirit Well just as Arthur Flinders-Petrie arrives to raise his wife from the dead (and destroy the universe accidentally.

FACT #6) However, Burleigh isn’t content with his miserable life anymore and enters the Sprit Well on his own and begins to change his own past. This causes the Spirit Well and everything else to be quickly destroyed.

This is where my speculation comes in. It is my theory that:

But honestly, to me, it was Engelbert “Etzel” Stifflebeam who saved the universe by living with Christ-like love for those around him. Sure the others were absolutely necessary, too, but Etzel is the one standing on the true foundation.

In this, I liken the novels to THE LORD OF THE RINGS where the weakest saved the world. Here the one who loved the most saved the universe.

My recommendation …. get this series.

There is a brightness in this series that shines best in the last book. As Stephen says, “The faith element is inevitable,” and that proved very true with this last—my favorite—book of the series.

For fans of fantasy, history, time-travel, and science-fiction novels, for ages teen on up.

Note to parents that there are some mature themes presented in the book, so reading the books yourself will allow you to discuss those items.

I am giving away TWO brand new, pristine books from the Bright Empires series

Note that book 5 will include a signed bookplate by Stephen Lawhead!

To win, you need to:

Today’s puzzle is quite simple… answer the following question:

The correct answer—as Stephen Lawhead interprets it—is given in THE FATAL TREE, and this bears upon Engelbert’s role in the book.

If you haven’t read the book, then you’ll have to research it using Google and give me your best guess.

The official answer is exactly TWO WORDS, but note that any other answer based on research will also count toward winning one of the two books … just do your best!

Once you have the answer and have answered it, email it to me through this contact form. Also, let me know which book you are interested in and I’ll hold two drawings at the end for all those that solve the puzzles.

Also, REMEMBER TO COMMENT BELOW, as that is part of the eligibility rules.

(To save on excessive international postage, sadly the contest is open only to residents of the United States. Sorry

And make sure you visit the other members of the tour …

5 thoughts on “Review of The Fatal Tree by Stephen Lawhead – Day 3 – PLUS A DOUBLE GIVEAWAY!”