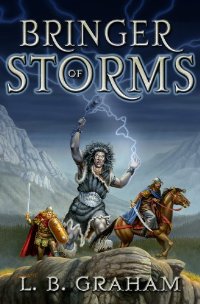 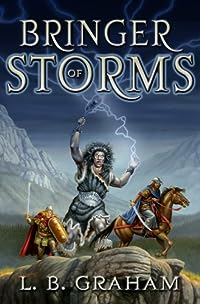 L.B. Graham, a friend of mine here in St. Louis, has signed a three book contract with AMG Publishers!

This is fantastic news, because L.B.’s last book series was finished in 2008 (The Binding of the Blade, see the cover to the right).

Now his fans finally get to taste a new adventure, this one more expansive in scope and adding in a touch of sci-fi to the fantasy world.

The working title for the new series is THE WANDERING.

But I won’t say more, so you’ll have to keep your eyes on his blog for more announcements!

And L.B. is in great company … here is a list of other authors with AMG’s young adult imprint, Living Ink Books:

Many of these folks I know, but none as well as L.B. Graham himself.

L. B. Graham was born in Baltimore, Maryland, in 1971. He loved school so much that he never left, transitioning seamlessly between life as a student and life as a teacher. He and his family now live in St. Louis, Missouri. They would like one day to have a house by the sea, which he wants to call “The Grey Havens.” He and his wife have two children. Both love books, which pleases him immensely.

L. B. holds a B.A. in Literature from Wheaton College, and an M.Div from Covenant Seminary. He is chairman of the Bible department and teacher of English and ethics at Westminster Christian Academy. He has written several articles in IVP’s Dictionary of Biblical Imagery.

2 thoughts on “Exciting News For Fans of LB Graham”