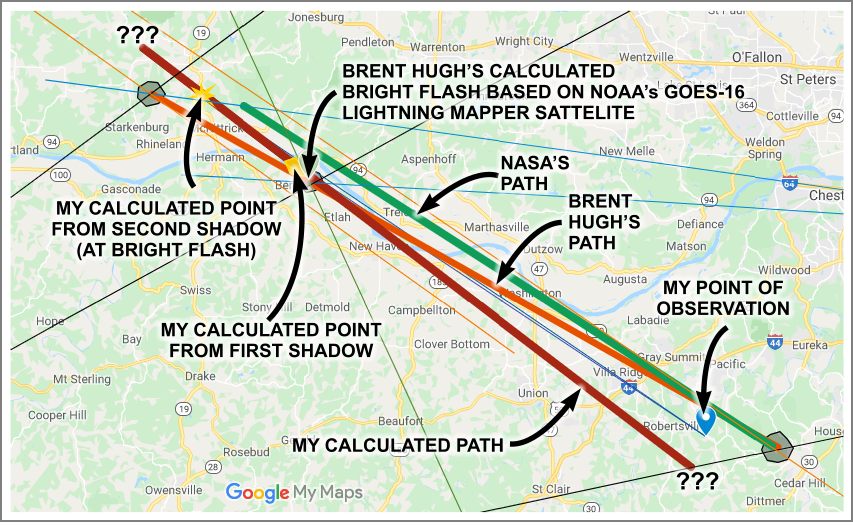 UPDATE on December 1, 2019: I have recalculated my positions based on a clarification of NASA’s numbers as explained by the Strewnify.com “global meteorite hunters” website.  This makes my own calculated meteorite path much more accurate and puts my own “bright flash” point almost identical to Brent Hugh’s.  See below…

When I saw on Instagram that a meteorite had entered the earth’s atmosphere over St. Louis and become a spectacular blazing fireball, the first thing I did was check my security cameras to see if I had captured it.  Alas, I had the time wrong, and thought it had somehow escaped me … but once I looked in correct window of time … there it was!  WOW!

This is especially fascinating for me because I have a (SPOLIER!) meteorite crash to Britain in the prologue of MERLIN’S BLADE. 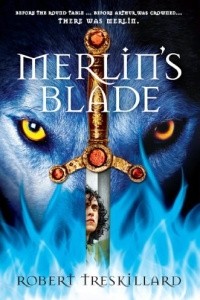 The one that flew over St. Louis is much smaller than the one in my novel, which was large enough to knock down all of the trees, light them on fire, and carve out a huge hole in the ground which became Dozmary Pool, the lake into which legend has it the dying King Arthur asked Bedwir to throw Excalibur.

Oh, and I won’t mention what my novel’s meteorite became … spoilers galore! Did it ever occur to anyone that I might actually be writing sci-fi?  “Mysterious rock from outer space crash lands in Britain” … hmmm ………

So, back to the video of the St. Louis fireball: one of the cool things about my security video is that the meteorite cast clearly defined shadows on my driveway … which I have used along with geometry and trigonometry to approximate the path of this particular celestial object.

The reason’s I calculated the path is that there appears to be controversy about the path the meteorite took.  For instance, the American Meteor Society claims it flew over Lincoln County and possibly crashed near Wellsville, MO, which is northwest of St. Louis.  In fact, a lot of the news articles cite this location for the meteorite’s path.  NASA, on the other hand, claims it flew over Franklin County southwest of St. Louis … which is where I live.  As well, a man named Brent Hugh calculated the path on his own … right through Franklin County and only 2 miles from my house.  Very cool!

Who is right? Can I solve the mystery?  Can my own independent observations weigh in and tip the scales?  Admittedly, anything I can do will be approximate only, but still … I should be able to at least tell whether it flew in Franklin or Lincoln counties, right?

Before we get into my calculations, let me cover my assumptions. In order to determine the path I had to know approximately how high it was when it entered the atmosphere, how long it flew before breaking up and disappearing from sight, and how far off the ground it was when that happened.  These numbers will give me a “descent triangle” that I can use along with the “shadow triangles” I will determine from my video to calculate an approximate path for the meteorite.

Here is an example of the “descent triangle” from the American Meteor Society: 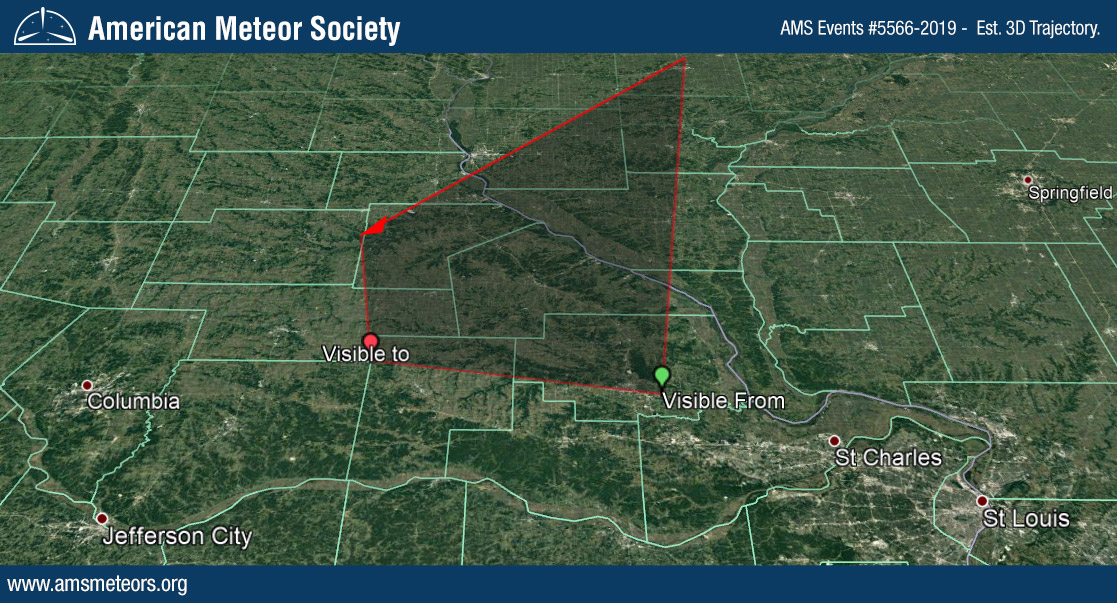 Scouring the internet, I found some conflicting numbers about the meteorite, but realized that none of them are different enough to drastically throw off my calculations … so I settled on NASA’s numbers (as explained by Strewnify.com), which are these:

From this I printed up two distinct still shots of the shadow cast by the meteorite and worked to find their positions on my driveway using 3D geometry drawing skills I learned to create superhero comic books.  Thankfully my driveway has permanent lines in the concrete, and that helped my process.  Here’s an example of my work to find the position of the shadow of the corner of my gutter. 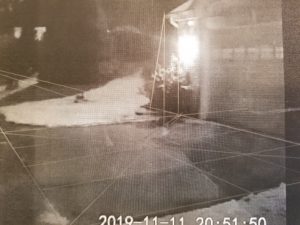 I then hung a tight string from the corner of my gutter to the spot on the driveway, which gave me two angles … one upward to the height of the meteorite, and one on the ground following the path of the meteorite.  I did this twice at two shadow positions.  Here’s a few photos of that process: 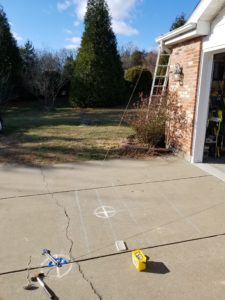 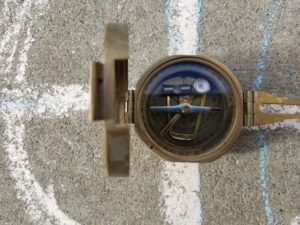 From the two height angles along with the above numbers from NASA, I was then able to calculate using trigonometry (Cosine and Tangent, specifically) how far away the meteor was when each shadow was caught and recorded. 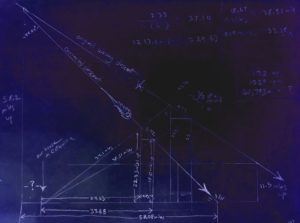 Then using the two ground angles and the distances, I was then able to plot two points on a map, and from that draw a straight line between them showing the approximate path of the meteorite.  I have included my route on the map below, along with NASA’s route, and another from a man named Brent Hugh who posted a link to his map in a comment contradicting the American Meteor Society’s web page purporting that the meteorite went through Lincoln County.  Now that I have updated my calculations, my “bright flash” point and Brent Hugh’s “bright flash” point almost exactly coincide. Cool!

I have also estimated a potential “crash point” for the meteorite, if indeed it didn’t burn up completely before hitting the ground, and this is just slightly west of Mineola, MO.  This point is dependent on the start point of the meteorite, however, and I can only very roughly estimate this. 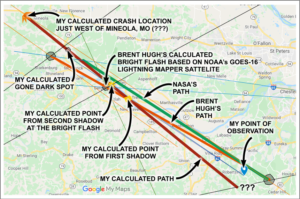 One thing that made this process easier is the fact that when we built our house we positioned it as nearly north-south and east-west as we were capable, which I verified with a compass, pictured above.

Knowing that all of my measurements were prone to errors on many levels, it is interesting how closely my own estimate lines up with the official one from NASA, as well as Brent Hugh’s that used four points for triangulation.  At a minimum, I was able to prove a Franklin County path for the meteorite.  After all, this thing nearly flew over my house!

And thanks again to Strewnify.com for clarifying NASA’s numbers … this helped me solve my previous dilemma.

1 thought on “The Mystery of the St. Louis Meteorite – UPDATED!”