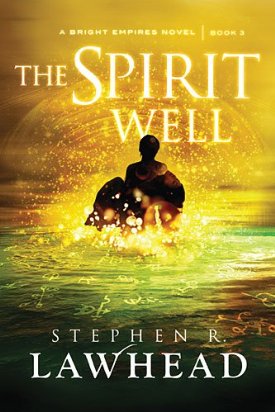 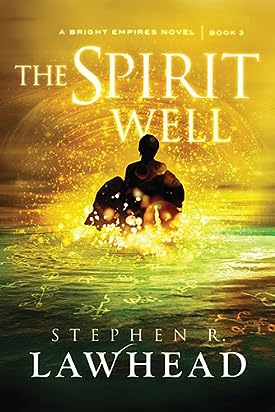 Welcome to the 2012 Christian Science Fiction and Fantasy blog tour. of Stephen Lawhead‘s latest installment of his daring BRIGHT EMPIRES series of novels: THE SPIRIT WELL.

Make sure you check out my previous book reviews over at

As well, make sure you check out the reviews of all my fellow CSFF Blog Tour members, the list of which is at the bottom of this blog post.

So, let’s start out by covering samples of Lawhead’s craft.

As always with an SRL novel, I must say that this book’s craft, and the mechanics of its writing, are excellent. Stephen not only knows how to write compelling dialog, but also how to write creative scenes that you can easily picture.

For the following sample conversation, Kit has just returned from the stone age and has arrived in 1950’s Spain. (Typo’s are mine.)

This explanation was duly repeated and was discussed by the five townsmen gathered around the three-wheeler where Kit sat like a disheveled dignitary conducting an al fresco audience.

“Do you have papers?” asked the priest at one point, to which Kit shook his head.
The men conferred again, with much gesturing and head scratching. “What shall we do with him?” asked Father Tadeo.

“He has broken no laws that I know of,” suggested Diego. “I do not think I can arrest him for getting lost in a cave.”

“Arrest him? I don’t want him arrested,” said the mayor. “I want him gone. Look at him. He is a barbarian.”

“He is an Englishman,” said Ricardo.

“He was exploring and got lost,” added Ramon. To the priest, he said, “You should give him a bath and a meal.”

“Me! I should do this? Madre de Dios! This is none of my affair.” Father Tadeo put up his hands. “It is none of my concern what you do with him.”

“But you are the priest of this town,” asserted Mayor Benito

“What has that got to do with it?” countered Father Tadeo.

“The duties of hospitality fall to you,” said the mayor.

“No such thing,” replied Tadeo. “You are mayor … hospitality is yours to provide.”

“We must do something,” insisted Ramon. “He cannot live in my truck. I have to go home and feed the cattle.”

“He has no papers,” said the mayor.

“Does he need papers?” said the mayor.

“Does he need papers?” wondered the policeman.

“All respectable people have papers,” suggested the mayor. “Another reason he cannot stay here.”

Having spent 2 months in the Spanish speaking capital of Mexico, Mexico City, I can easily picture this conversation, and it seems so real! I was practically laughing out loud as I read it.

For a sample of Lawhead’s impressive powers of description, I offer the following example (again, typo’s are mine):

She hurried away, leaving Cassandra to gaze around the little shop. In addition to the bookshelves lining the walls, there was a round brass table of the kind much favoured in the Middle East, consisting of a tray balanced on a carved olive-wood stand. Two large easy chairs sat on either side of the table and, between them, a floor lamp with a purple silk shade…

Cass moved to the nearest shelf and took in some of the titles. The History of the Assyrian Empire…A Walk In Old Babylon…Life in the Ancient Near East…The Lost Treasury of Nebuchadnessar…and other tomes of history, their leather spines creased and cracking with age.

The Omniscient Point of View

Now one thing you may have noticed in the above sample is that we are thoroughly in the omniscient point of view, because I highly doubt that the bewildered American, Cassandra, would have known that the brass tables were “much favoured in the Middle East”.

But is this a problem? Modern-day consensus is to NOT write in the omniscient point of view, but I would disagree.

Why? Because if you know what you are doing, you can pull it off, and Stephen Lawhead has done so marvelously. In fact, I would go so far as to say the the omniscient point of view helps MAKE the novels what they are … all the way from the throw-back chapter titles to the topics discussed, to the layout and ragged-edge feel of the pages, we have an “older” feeling novel.

And this “feel” to the physical book is part of setting up the reader to immerse themselves in the story, all Kindle’s being exiled.

CHRISTIAN ELEMENTS IN THE SPIRIT WELL

So, since this happens to be the Christian Science Fiction and Fantasy Blog Tour, what Christian elements present themselves in THE SPIRIT WELL?

God Is In Control

On many occasions in THE SPIRIT WELL it is made clear that God is in control of the events that are happening. Here is one sample.

“Ley travel?” he wondered. “Is that what you call it?”
“It is how it was described to me,” she answered. “I suppose you could say I fell into it by accident.”

“Dear lady,” offered the priest with a smile, “there are no accidents.”

God’s Plans For The Universe

Also, there is a lengthy discussion about God’s purposes in creating the universe, and how he wants to fit manking into his plans. Here is a short excerpt:

“… Our aim is nothing less than achieving God’s own purpose of His creation.”

“And what purpose would that be?” Again, Cass hoped her response was not an offense to these kind and hospitable … and probably delusional … people.

Mrs. Peelstick fielded the question. “Why, the objective manifestation of the supreme values of goodness, beauty, and truth, grounded in the infinite love and goodness of the Creator,” she concluded, her tone suggesting that this should be obvious.

“Human beings are not a trivial by-product of the universe,” Brendan continued.
“Rather, we … you, me, everyone else … all humankind is the reason the cosmos was created in the first place.”

“I am familiar with the anthropic principal,” Cass replied. It was a favourite hobbyhorse of her father. “The theory that the universe was designed to bring about human life … that the universe exists not only for us, but because of us.”

And then on the next page, my quote continues:

“We go further,” said Mrs. Peelstick. “We extend the principle to say that the universe was conceived and created as a place to grow and perfect independent conscious agents and fit them for eternity.”

Now, this information given by Lawhead is not without theological implications, which is beyond the scope of this blog post, but suffice it to say that Lawhead makes it clear that God has a plan for mankind, and wants to be in fellowship with him.

The One True God vs. Many Gods

Also, Stephen is able to fit in an interesting discourse about one God vs. many gods, and this was fun to read.

The priest smiled sadly. “But it is not so with the Habiru. Their god El makes many demands, and one of these is that there must be no other gods worshipped by those who call on his name. This, I think, is because the Habiru do not recognize that all the gods are but expressions of the One, the Absolute God.”

“I have heard this said,” remarked Arthur. Like the English gentleman he was, Arthur did not argue with his various hosts about religion.”

This last thought by Arthur Flinders-Petrie is interesting to me, because I wonder if this position is one that Stephen Lawhead himself takes while traveling … to listen and learn, but to be careful not to offend those around him. This is probably a wise approach, especially if one is traveling in the Middle East!

Either way, what I really like is his faithful witness regarding many Christian truths to all the readers of his novels, which must be a wide audience, indeed, considering how many years he has been writing and gathering fans.

I heartily-heartily-heartily recommend THE SPIRIT WELL to all lovers of science-fiction and fantasy. This novel has some “back to the future” elements to it, so be prepared to have your mind bent 180 degrees as you read this most excellent third novel in THE BRIGHT EMPIRES series.

MY OTHER BRIGHT EMPIRES REVIEWS

Also, feel free to read my reviews of the first two books in the series: