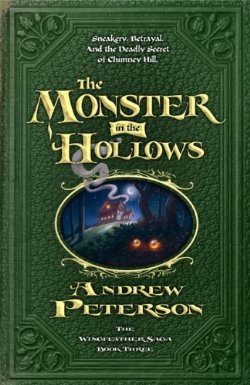 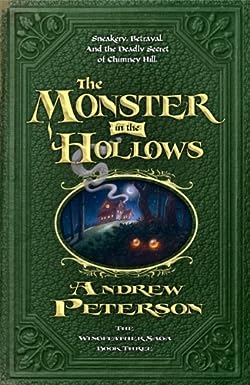 Welcome to The CSFF Blog Tour! Where do I begin writing a review of such a wonderful novel? I think with the author himself, Andrew Peterson.

One thing to note is that THE MONSTER IN THE HOLLOWS (book 3) is the first of Andrew’s novels to be published by his Rabbit Room Press, while novels 1 and 2 were published by Waterbrook/Multnomah. I don’t know the reasons for the change but I can imagine one of the following:

In either case, I think it is a smart move, because not only has Andrew built up an audience for his novels already, but as a musician he is already traveling the country and can hand-sell them.

The amazing thing to me is that Andrew went to a lot of trouble and expense to make sure book 3 matches books 1 and 2 perfectly, including artwork by the same professional illustrator (Justin Gerard), a matching background, the same font, and the fancy glossy/satin cover scheme.

What an awesome job, Andrew! If it wasn’t for that little Rabbit Room logo (which is cool), I would have never guessed the switch. 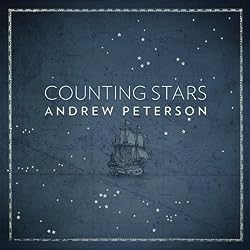 The novel centers around these aspects of the Wingfeather’s normal family life, but weaving in exciting plot elements that all come together in the end to surprise you and set the stage for the last novel in the series: The Warden and the Wolf King.

Andrew, in my opinion, is one of the best Christian authors for young adults alive today. His craft is impeccable, his editing top notch, his ear tuned to the beauty of words, and his sense of story superb. You can hardly get any better than this folks, so don’t miss out on this excellent fantasy series, they are novels that will turn into classics of our day.

Buy this book! Bronze This book! Keep it safe, but don’t keep it secret! THE MONSTER IN THE HOLLOWS will appeal to all kids 10 and up, including adults who enjoy an excellent story of fantasy, sneakery, betrayal, and deadly secrets.

Sorry folks! I normally write up a continuation of my review for both day 2 and 3 of the CSFF Blog Tour, but not this time. My kids have gotten our whole family deep into filming a fan book trailer for Jill Williamson’s FROM DARKNESS WON this week, and I’m busier than I’ve ever been.

Jill herself is flying out for the ACFW conference and will be playing one of her own characters in the trailer. Christian Miles is reprising his role as Prince Achan, and Jacob Parker as Esek. My daughter Adele is playing Vrell Sparrow, my son, Leighton, a minstrel, and my youngest daughter, Ness, is playing a fiddler and a standard-bearer. I am reprising my role as Sir Gavin, and thus the long hair and beard.

(If anyone is interested in supporting our fan project, you can find a page here that will give you all the details, including the rewards.)

So, since I don’t have time right now to write more, please, please, PLEASE check out the other tour members to see what they think of THE MONSTER IN THE HOLLOWS! Awooooo!

6 thoughts on “The Monster In The Hollows — A Full Review”